As I announced it before, is 2021 for me as a father of a family an exciting year for electric cars. There are several models on the market that cover my needs . Especially with the Škoda Enyaq iV, an extremely exciting car in terms of price / performance ratio will appear at the end of the month. All the more I was looking forward to this test, to take a closer look at the Enyaq.

The Škoda Enyaq iV is the Czech automaker’s first series model based on the modular electrification kit (MEB). Currently there is for the Swiss market launch on 20. May 2021 two available variants, the Enyaq iV 60 with a usable battery capacity of 47 kWh and the previous year 80 With 77 kWh. The Enyaq offers generous space, which is typical of Škoda. In the interior, new design
Selections replace classic equipment lines, the Enyaq iV can be configured online according to your own wishes . The use as a family car with enough space for 2 children is exciting, 585 liters of trunk volume, a trailer hitch and roof rails for mounting a roof box. Current delivery times are around 3 months.

In the interior, Škoda relies on so-called design selections and a central, dominant 13 ″ screen. The Design Selections are based on modern living spaces, with coordinated colors and materials. They also go the way for sustainable products, so natural and recycled
materials are used. After seeing various design selections, I recommend that you check them out live.

In the tested equipment variant, there were no wishes that would be unfulfilled. An electric seat adjustment with memory function is part of it, as well as a massage function for the driver. The test was too short for a long-term conclusion of the seats, but it definitely sits well and the lateral support also fits. For me, as an above-average tall person, the seat can also be comfortably adjusted and the steering wheel adjusted accordingly. Extendable support surfaces for the lower legs also support this.

As with all electric cars based on the MEB platform, the Enyaq also offers plenty of space in the interior. Adults can also sit on the back seat if someone is very tall in the front. Also ideal for families, on the two rear seats as well as on the front passenger seat it has ISOfix fastening options.

The central display with 13 ″ Screen diagonal is the element where everything comes together and can be adjusted. When it comes to operation, Škoda uses a mix of physical buttons and controls directly on the screen. On the one hand, there are many setting options directly on the steering wheel and an additional lever for the cruise control. In contrast to the group brother ID.4, you still use physical buttons and buttons. Oh, the Augmented Reality Display is optionally available, 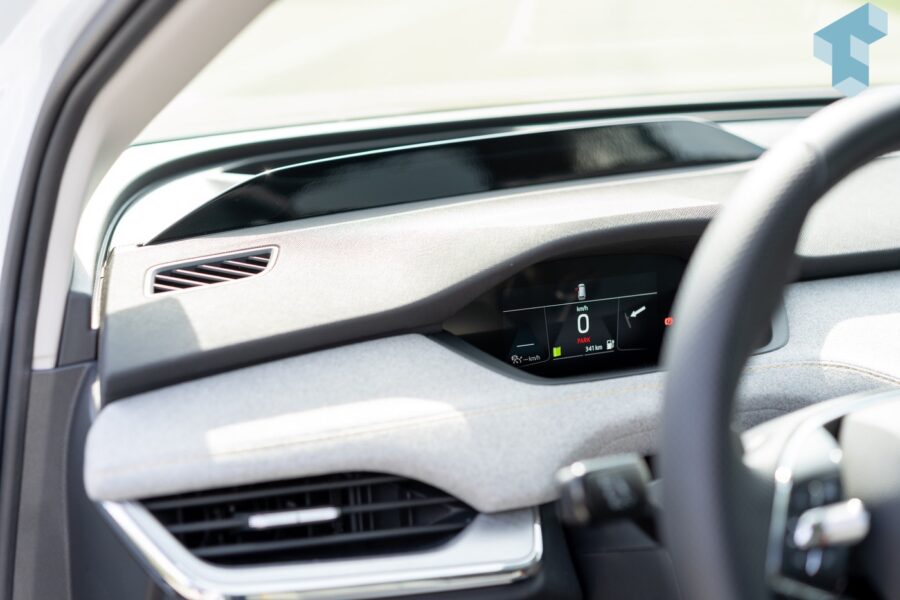 I explained that in more detail in this post .

For the driver there is a small 5.3 ″ display that is discreetly embedded in the dashboard. The so-called digital cockpit clearly shows the most important information on speed, driving data, navigation and assistance systems. This is built in as standard, regardless of whether a head-up display has also been configured. The menu structure of the infotaintment system is similar to the VW solution, but the visual appearance is completely different. Also included is wireless Apple CarPlay, which I definitely didn’t want to miss.

As already mentioned in detail, I currently attach great importance to family-friendly electric cars. Especially as a family of four who would like to use the car for holidays, this year you can enjoy exciting models. The Enyaq definitely belongs there and has some exciting things to offer. On the one hand, of course, the trunk volume of 536 liters. That is enough for day trips and holidays with luggage. Should there be more, roof rails are available and you travel with a roof box.

An optional trailer coupling is available for bike racks or a trailer. The Enyaq may 900 kg of trailer load. The car should therefore meet most of the needs of families. Little things are also exciting, such as the ability to set the child safety device electrically from the driver’s seat. The sun blinds are also already integrated with the Family Basic package. These are practical things that Skoda thinks through to the end, such as the sunshade integrated in the driver’s door or the ice scraper in the electric tailgate.

On the move with the Enyaq iV

For detailed test reports, I can usually test the cars longer, but here I still give the most important impressions of the test event. The fully equipped test car has built in some assistance systems that I already knew very well as an ID.3 driver. Here too, the “Travel Assist” with automatic distance control and lane departure warning is on board. This makes it easy to drive, the recognition of traffic signs and speed adjustments makes it easy to drive. The Enyaq also keeps itself in the lane and brakes itself on tight bends or roundabouts. In a traffic jam, the electric car can independently stop, drive off and automatically follow other vehicles. The built-in 360 ° I would definitely configure the camera.

The driving modes are operated in the Enyaq with a rocker switch in the center console. The maximum recuperation level is set in B mode, while in regular driving mode D the driver can manually set three recuperation levels using the paddles on the steering wheel. As with all MEB models so far, the recuperation is too weak for a full one-pedal drive feeling. To do this, when the brake is operated, recuperation takes place before the mechanical brakes are activated. Despite the weight of over 2 tons, the Enyaq iV accelerates 80 from 0- 100 km / h in 8.6s, the maximum speed is at 160 km / h cordoned off.

The Enyaq can be quickly charged on the go via the CCS connection, which has now become a standard. There was also a stop at the largest GoFast charging point at the motorway service station in Würenlos. In Switzerland, the Enyaq iV the 100 kW charging power as standard and with iV 80 it is 125 kW DC charging power. During the test drive, the battery levels were too high to make a meaningful test. For over 60% SoC my test car reached without any problems 60 kW. Since the technology behind it will be the same as with the ID.4 from Volkswagen, the charging curve will look good – as soon as I can drive the car longer, I’ll catch up on this test.

A kW AC charger installed. This means that it can be connected to a standard wallbox with a maximum of 11 kW, with the model with the large battery the car would be fully charged in around 7 hours. This is hardly relevant as the car rarely comes home empty. In my case I have the Enyaq regulated with Solar power is charged from your own photovoltaic system, this works with the combination of an intelligent charging station and the Solar Manager .

For the Enyaq iV 77 a WLTP range of 536 km called out. As always with the standardized test values, these are too high. I had an average consumption of . 2kWh / 100 km. This consumption would give me a realistic range of around 420 km, which I would have estimated with my previous experience. The Enyaq should work well as the ideal travel car for families in the summer vacation.

I had great expectations of the Škoda Enyaq iV and they were met. A well thought-out electric car that offers an affordable solution for many families to get started with electric mobility: Realistic range of over 400 km, place for two child seats, enough storage space and optional trailer hitch or roof rack for holidays. With the range, family vacations in neighboring countries are no problem and charging stops are not a bad thing, especially with children.

Since the question of whether VW ID.4 or Škoda Enyaq iV will come up anyway: Both are good family electric cars in my opinion, thanks to similar specifications you can almost only decide on the basis of the look and personal (brand) preferences … )The Škoda Enyaq iV 60 is in Switzerland from 42 ‘590 .- CHF and the iV tested here 80 from 47 ‘590 .- CHF.