Review: photovoltaic system with storage in 2020

I have decided to write a review for each of my PV systems. In this regard, I have received many inquiries that I would like to meet. Since September 2017 my system is in operation , I have expanded it twice and also bought a memory . Meanwhile I have almost 26 MWh of energy produced, these are nice numbers. Especially since I would like to do some advertising for photovoltaics here, as the remuneration in Switzerland will rise for the first time since its introduction this April.

As mentioned I almost 32 ‘000 kWh of electricity generated by my PV system, which at the end of September 2017 went online. That means in just over three years. In November 2019 I still had upgraded the carport with 8 modules and its own inverter and at the end of June 2020 another 6 modules placed on the west roof. Therefore the increasing production figures year-on-year

In the year 2020 I could finally do a lot more Generate electricity than previous years, thanks to the extensions. So I totally got excited 12 ‘400 kWh generated electricity from the roof. Since it has been expanded, I have to estimate the relative yield slightly, but should be pretty much exactly at 970 kWh / kWp. I mean my modules with around 310 W generate around 310 kWh energy.

In the year 2020 I had a power consumption of 12 ‘600 kWh that has increased slightly compared to previous years. Over the whole year, thanks to the Varta power storage system, I was able to achieve a self-sufficiency rate of 53% to reach. Full 1900 kWh I got it again from the battery alone and didn’t have to get it from the electricity company. The self-consumption of the generated electricity is 37%, ergo I have a little more than 4500 kWh fed in and earned something from it. I achieved the good self-sufficiency and self-consumption rates thanks to the intelligent Solar Manager , which controls the devices in the house according to production.

Personally, I think it’s important to know which consumers use how much energy each year. For this I use the possibilities of the Solar Manager to be able to measure all possible consumers. Either directly through intelligent devices such as the Easee charging station or then by means of measurements via Shelly 3EM or myStrom Plugs .

It is not surprising that the numbers of heating, hot water and electric cars are dominating. But maybe the following two consumers do. Because the server with NAS and network components is significant. With approximately 117 W constant consumption are the more than 1000 kWh annually no surprise.

In total I have up to 4 ‘000 kWh per year all consumers precisely identified. This part will mostly fall on the unmeasured kitchen, lighting and other small consumers.

As already mentioned, the Solar Manager regulates my entire energy budget and optimizes self-consumption. The Solar Manager can intelligently regulate heat pumps directly via the network, prepare hot water using the temperature or regulate the electric car continuously. That goes on, down to the aforementioned smart plugs. For me the heat pump is unfortunately too old, it has no interface and is still attached manually to tado . Accordingly, I have the greatest potential for optimization with hot water and the Varta storage tank naturally serves as a buffer for the electric car. The myStrom Smart Plugs still control consumers that I can simply switch on after the sun is out. Like e-bike charger, charger for machines in the garage or for 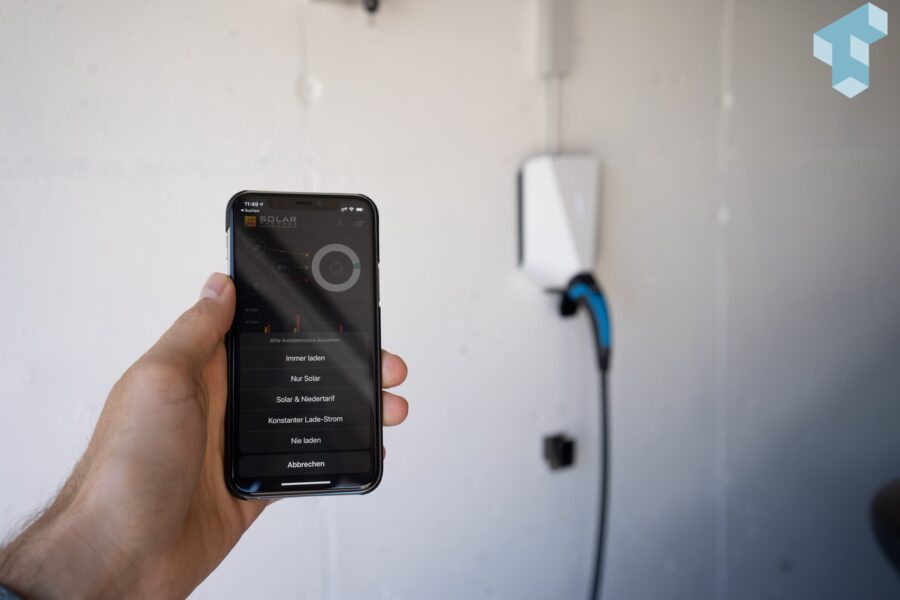 the iPad on the wall . For washing machines, tumblers and dishwashers, I installed the plugs as a pure measurement, I control the devices via the integrated timer so that they use the electricity during the day in the sun.

This year, for the first time, I received significantly better remuneration for the electricity that was fed in. On the one hand 7.4Rp./kWh from the network operator and I also sold the HKN for 2 cents. In total and taking into account the high and low tariffs, I got a little more than 410 .- CHF reimbursed. I have about 410 .- CHF electricity costs saved, in total this year 1760 .- CHF saved through the PV system.

The year 2020 was also for Corona the energy management not a normal year. Mobility was more limited in spring and in the last two months. These months had a correspondingly positive impact on energy consumption for electric cars. On the other hand, with more home offices, there has of course been significantly higher consumption for IT, cooking etc. in the household. For 2021 I want to try the self-sufficiency a little more to increase. One possibility would be to buy a heat pump boiler, which would save a lot of energy. However, since the location does not meet all requirements, it would be a larger project. The months of April to Aug / Sep have self-sufficiency rates over 83% little optimization possibilities, so I have to focus on the low-income months focus.

The contribution Review: Photovoltaic system with storage in the year 2020 appeared first on TechnologyBlog .